Some can’t live without magic, others can’t live with it. The Inquisitors hiding in the hollow halls of /join Citadel have made it their goal to persecute every mana user possible. Under the watchful eye of the Great Wizard Murry, you must make haste in setting these misguided Muggles straight! 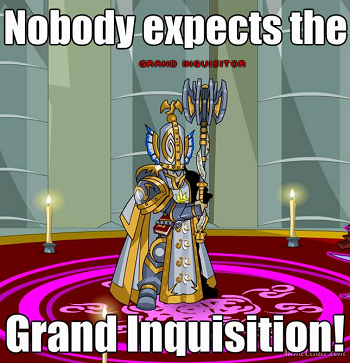 Old Man Murry has had his fair share of encounters with the Inquisitors. From torturous fish slapping to Horc sweat suspension, he’s seen it all. Anyone in their right mind would want to get back at the Inquisitors for their injustice. Fortunately, while Murry seems to have lost his mind years ago, he has a plan to give the Inquistors a taste of their own medicine and needs your help. He needs you to start with Inquisitor Grunts and Guards. Then he encourages you to slowly slice your way up the chain of command to Captains, until finally coming face to face with the Grand Inquisitor himself. 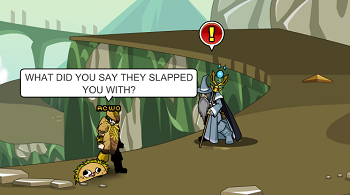 Guardians of the Caster Cosmos

After spending ages as a Citadel prisoner, Murry is fairly certain there is more to the Inquisitor’s plan than the eradication of all magic. After borrowing some items to investigate, the Inquisitors seem to use a vacuum device to drain the mana of those they’ve imprisoned. What’s interesting, however, is where the magic goes upon capture. Could these machines actually be powering orbs for the Inquisitors’ own use? 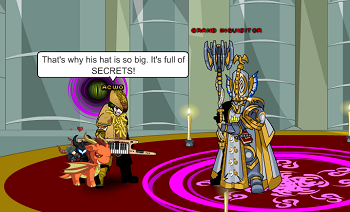 Murry has seen enough. It’s time to cut off this beast at the neck. March into the chamber of the Grand Inquisitor, dismembering any who stand in your way. Beating the leader in his own stronghold should be enough to embarrass the anti-magic sediment out of the Inquisitor forces. Time is of the essence in this encounter, as the Grand Inquisitor is too far a coward not to summon backup. If you fail to win the battle in time, his beast, Belrot the Red Fiend, may just be waiting for your carcass. 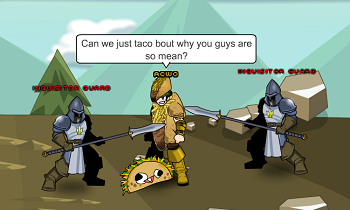 Sitting all day at the base of a mountain looking for heros to help teach Inquisitors a lesson or two on mana management isn’t the best way for Murry to make a living. Lucky for him, those that help tend to have gold galore, so selling his spectacular collection of wares for sky-high prices isn’t too much of an issue. Get your wallets ready heros as though this might be one of the older releases in AQW, the gear in Murry’s shop is still some of the best to date!

The Portal is a Lie.

Journeying through the mountains surrounding the colossal Citadel, one would come across paths to nowhere, an overly aggressive grizzly bear, and a bloodshot portal to a world beyond. While orange or blue portals with a companion hexahedron are the only portals deemed safe to explore by Loremasters, the pull of the possibilities in this portal are hard to pass up. However, not every hero can enter the portal’s chamber for a bag of 50 Bone Dusts is needed to gain passage inside. I heard that Big Jack Sprat and several of the Skeletal Warriors’ techniques are getting a little rusty. Maybe a quick skirmish with the clumsy skullheads could dust off any bad habits. 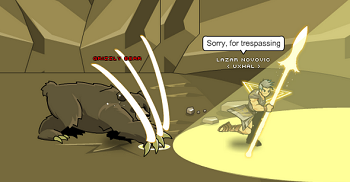 With the school season in full swing, I’m sure many of Lore’s heros are stuck behind a desk for hours each week. However, the extra stress of reality doesn’t need to push virtual reality onto the backburner. Finding time to play a game or two takes stress off and keeps everyone sane. Thank you to Lazer_AE for his unbearably awesome screenshot.