Guess who’s back again? The Mysterious Class Designer is here to give you the purple-y and juicy details of Chaos Slayer with this new skills breakdown. As you may already know, Chaos Slayer is separated into 4 classes that have the exact same abilities: Berserker, Thief, Mystic, and Cleric. Chaos Slayer is really a class above classes - or as I like to call it, a class to end classes. 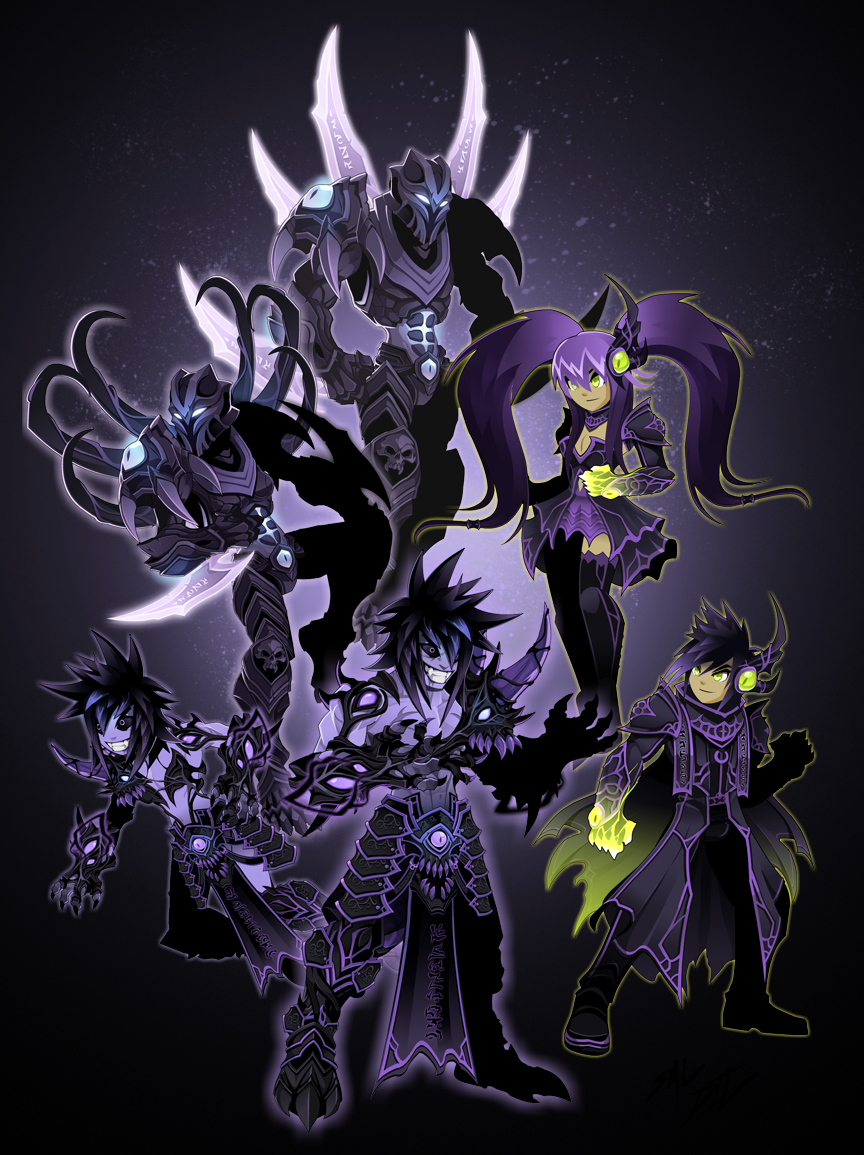 Chaos Slayer embodies the nature and power of Chaos in that you can’t predict what it will do next. However, one thing is certain; this class holds great power. Chaos Slayer is a Physical/Magical hybrid with a Mage’s mana regeneration model. This means that you get mana back based on how much damage you dish out relative to your own HP, especially on crits. Regaining mana won’t be too much trouble, and you’ll see why. The best stats to focus on are Intellect, Strength, and Luck. For this crazy and chaotic class, you have to focus on both your LUK stat and your luck in real life.

The Chaos Slayer's weapon attacks are empowered by Chaos making any weapon strike hit like a blade made of pure chaos. Every strike draws in more Chaos blight. Hits up to 3 targets. If you are Chaorrupted, this becomes a single-target ability.

This autoattack is unique because it hits up to 3 nearby targets. For each successful hit, you gain a stack of Chaos Blight, which increases your damage slightly. This will increase the base power of all your other skills, too. The more targets you hit, the more mana you regain.

Let the Chaorruption take over and render your physical form. Deals moderate damage and Chaorrupts the Chaos Slayer, increasing crit and hit chance by 10% and focusing all attacks on a single target.

This ability turns you Chaorrupted and is best used for fighting a single enemy because all of your attacks – including your autoattack – will be aimed at one target only, like when you’re fighting a boss monster. The hit chance and critical strike chance buff are there to help you with mana control. It will ensure that you hit your target more often because you’ll lose your stacks of Chaos Blight if you miss consecutively. The critical strike chance buff will increase your chances to crit and gain more mana back.

Chaos is the unpredictable power shrouded in mystery. What effects will be inflicted onto your targets? Deals no damage and randomly applies up to 4 effects. Hits up to 6 targets, but will become a single-target ability if you are Chaorrupted.

True to the nature of chaos, this ability can apply as many as 4, or as few as zero, effects to your target. The effects it can potentially trigger are:

Summon Chaotic forces to mend your wounds or protect your physical form. Either heals you for a moderate amount over 6 seconds or places a defensive buff significantly reducing all incoming damage for 8 seconds.

This skill will either give you a heal-over time or reduce all damage you take by more than half. The heal-over-time gets stronger with each stack of Chaos Blight you currently have.

Who doesn't want more HP? Enmity gives you more survivability, which makes Chaos Slayer even tougher to beat. As for Ultimate Power, chaos has not yet shown us the true effect of this skill. The outcome of the Doomwood war will affect the rank 4 passive's Ultimate Power skill – if the Alliance wins, it will become a 15% crit damage buff. If chaos wins, it will become a 10% attack buff. The fate of this class is in your hands!

Create even more Chaos with a massive explosion, hitting up to 6 targets and evolving all effects from Enigma into more powerful effects. If you are Chaorrupted, this becomes a single-target ability.

In addition to its high damage burst, Pandemonium also amplifies all of the effects from Enigma.

Needless to say, if your target already has the Courageous buff, you may want to avoid activating this skill.

Spell Disruption – All spell damage taken is reduced by 35%.

You won’t find many monsters in AQW that deal spell damage to you, but this can be useful in PvP. If you combine Spell Disruption with Surge, you’ll take very little damage from spell attacks.

There you have it, a breakdown of all the effects of Chaos Slayer. This class is fun to use and wild in battle. Chaos Blade is the best autoattack I have seen since it gets stronger as the battle progresses. I really enjoy having the option to switch between AoE and single-target mode with Chaorruption. You really have to watch out what Enigma will apply – since it has a short cooldown and uses little mana, you can keep spamming that skill until you get the effect you want. Then you can finish it off with Pandemonium. Always watch your HP because Surge might not give you the effect you want. With its several buffs and debuffs, Chaos Slayer is awesome for farming, soloing, PvP, group battles, and support – you could even say it's the ultimate class.