The time shattering finale of the Span Saga has begun. This adventure that has taken us scross time, space, and our other games. Now, is the final showdown with the Chaos Beast Kathoo AND Iadoa* who is the 10th Lord of Chaos. This is pretty huge because this release will give all of you who love the story your first clue at what is really happening when these Chaos Beasts are defeated. Also, if this is Chaos Lord #10, we only have three left before we reach Drakath. Wait, make that four -- the twins, Ying & Yang, have not been defeated yet either. As a player wisely noted to me on Twitter "How come there are so much empty space left on the map if we only have 3 Chaos Lords left?" Many players are relived and excited to know that it indicates this game has a loooong future ahead of it. If you survive the battle with Chaos Beast Kathool that is... Good luck heroes! 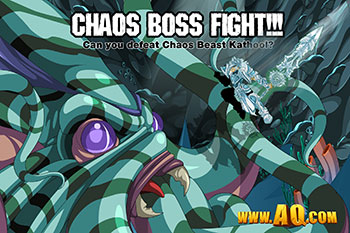 Kathoo is a powerful monster with his own AI. But for the ULTIMATE challenge,  Members can battle a max level version of him... the most powerful monster in the game yet. Defeating him in this mode is worth ultimate bragging rights... and a badge!