Experience Breaking Benjamin in an otherworldly video game event when you join us for an in-game concert on monster-infested floating islands. Battle as the band plays, team up with friends and other players to defeat  horrifying creatures in the Void, and take down the PlaneShifter boss to unlock the concert backstage area and the exclusive Far Away character page badge.* 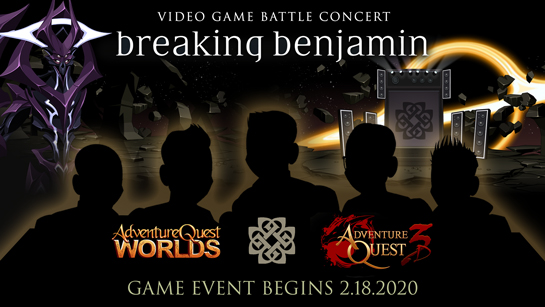 Ticket price? Free. Travel time? None. Log in at www.AQ.com

Multi-platinum rock band Breaking Benjamin has amassed a sizable and diehard fan base over the years both through their chart-topping music and electrifying live performances. The band’s latest release, AURORA adds to a healthy 7MM+ total album units sold worldwide, following 2018’s EMBER, which charted #3 on Billboard’s Top 200 and spun off the band’s 8th and 9th #1 singles to date. Showcasing nine re-imagined hits from across their catalog and one new single, “Far Away”, AURORA features fan favorites such as RIAA Certified Gold singles, “Failure” and “Dear Agony”, along with #1 songs like “Angels Fall” and “Red Cold River” and more. Stream or purchase AURORA here, and check out the band’s site here. Watch the official music video for “Far Away” here.

Breaking Benjamin just released the album Aurora! It is an acoustic collection of their biggest and most popular songs... and one new song called, "Far Away"

You can download/stream Aurora here

They are also on Tour... check out the tour locations and dates

The event is free for everyone to play but if you want to get your gauntlets on the HOTTEST gear in the stadium, talk to Johnny Track for the Battle Concert Rares Shop. 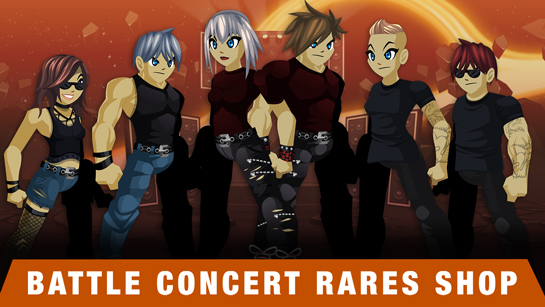 Fight through space and time to defend Breaking Benjamin's band members, then take on the PlaneShifter. Complete the story event to unlock the Backstage area, where you can battle to earn new armors, helms, attack guitars, and house items!

Return Friday for even more Rewards

To help you rock out as you battle, we're adding even MORE all-new concert-themed armor sets and accessories this Friday. Battle the Concert Treasure Chest for a chance to collect all the drops, and save up the new tokens and badges it drops to create the event exclusive versions of the Battle Concert Class: Shadow Rocker (level 20) and Shadow Ripper (level 60)

* (You will only be to earn this badge during the Breaking Benjamin battle concert event!)
Tags: Alina,
Read more Design Notes