Being A Concise And Much Anticipated Recounting Of Orbs, Fish, PvP and Friday the 13th

If you happen to own one of Miltoious' Orb Pets, you probably noticed that last week we took the quests out of the orbs. We did this mostly to keep their rarity for you. We have added code that allows ONLY YOU the orb's master, to access the quest that will allow you to transform your rare non-ac version of the Void of Miltonius into one of the other non-AC armors once again.

We might have to change a few more things like this to actually protect those rares as rares in other pets that came from the zone. As he warned you when he began this long, strange journey... Expect changes and don't cry when they come.

If your orb doesn't give you the quest, close your game window, empty your cache and relog-in to AQW.

If you were following Beleen's Twitter or My Twitter, you probably know about this already but we've got a new Pet O' The Month in Aria's Pet Shop. It's Beleen's Stupid Derp-Fish!

Someone pointed out that it has (once again) been more than enough time to add a new Pet O' The Month and Beleen discovered that it's "Catfish Month" so she took 12 seconds and drew this...

Bear in mind that Beleen is NOT one of AE's artists.

There was suddenly a mass call for Beleen's Catfish to be made into the Pet O' The Month, which I immediatly shot down. I mean, look at it. It's got a eye on it's forehead. However, as the requests piled up, and the more I looked at this stupid thing, the more I loved the idea of getting it into game.

So I spent about 7 minutes of my time, translating this monstrosity into a pet for Aria's pet shop, staying as faithful to the original design as possible.

If you are a member you can pick up this amazing Pet O' The Month from Aria for a limited time (but probably more than a month). So yeah... have fun with that thing.

This Friday we are closing the Darkovia PvP map and Re-opening Bludrut Brawl for ALL players (members and non-members alike will have access to the map)! It was one of the favorite maps from PTR PvP testing and we're happy to open it. Dumoose will ALSO be offering ALL NEW PvP Rewards!

Artix, I and a handful of the other staff here in the secret underground lab were VERY excited to be on the phone with voice actor George Lowe as we ran through and recorded his lines for the Friday the 13th super insane-o event coming two weeks from now. Voltaire recorded his yesterday. Kimberly should be recording hers any day now. J6 is working on backgrounds and the George Lowe NPC while Milton crafts monsters and begins working on some of the longest, and best Cutscenes in this game. Skyline and Dage are both working on Friday the 13th items and PvP rewards and Beleen.... she's drawing derp-fish. 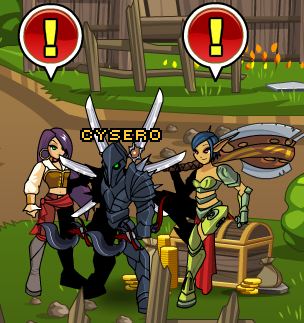 Since we placed Ballyhoo in Battleon, allowed her to give you up to 5,000 FREE GOLD per day and DOUBLED her chance to drop ACs from watching her ads, she has been getting a few more visitors and feels much less lonely. She's always happy to see you, so be sure to stop by and get your free gold and ACs every day!