Battle under Crystal Release is Live!

The battle continues under Battleon! Two levels of BattleUnder have already been uncovered, home to some of the most vicious Undead that Lore has ever seen. The deeper the tunnels travel, the meaner (and higher level) the baddies get.

Warlic the Mage has finally figured out how to activate the Portal in the second level of BattleUnder! (Geesh, that only took him like, what, 6 months?) The only way to pass through the portal to get to the third level is by solving the door’s magic rune puzzle in the form of a minigame!

Here’s the proper way of opening the portal: you have to trace the magical rune symbol with your mouse! Just like in BladeHaven when casting magic spells, you hold the left mouse button and carefully trace the pattern you see. Release the button when you finish tracing the pattern. If the rune glows green, you get to trace the next one! If it turns red, then the Load Balancer will crash again and will make AQWorlds unplayable.

HAHA I’m kidding, I’m kidding—if you mess up, you can just keep trying over and over again. There is no time limit, but these magical runes require a VERY accurate mouse path trace thing. Don’t give up! It took me a bunch of times before I finished the minigame and ended up in… 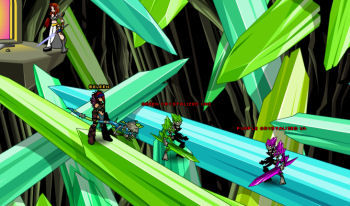 The Crystal Caverns (also known as Battleunderc) is a beautiful change of scenery from the rocky formations of the upper Battleunder cave systems. Huge colorful crystals jut out from the walls and ceilings, allowing you to move freely all over them.

But be careful; these caverns are home to vicious Crystallized Undead and Jellyfish. Yes, jellyfish. These jellies are SO POWERFUL that they don’t even need water to survive. Woah. Be careful out there.

Yara the Pally also has a new Merge Shop loaded with 11 brand-new weapons. You will have to collect enough Undead Essences and Cavern Celestites in order to purchase her wares… and some of her items even require merging one weapon with even more items to get an upgraded version of that weapon!

And the best part: 9 out of her 11 items are NON-MEMBER =D But don’t expect getting them to be easy—you’re going to have to farm your helms off for the coolest gear! Wahahha!

Yaaaaaaaaaaaaaay! More items have been added to the Player Suggestion Shop in Yulgar’s Inn!  All of the items in this shop were inspired by our fellow players. This week’s newest additions are: 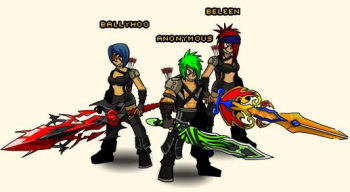 Wanna submit your weapon or armor ideas, too? Head to the forums with your masterpieces because you never know if–or when–your idea will make it in game and used by thousands!

Stratos is Leveling Up next week!

Stratos, captain of the Skyguard, is leveling up IRL on Tuesday! For his birthday, he wishes to share some of his favorite personal items with you. Make sure to wish him a Happy Birthday because on Tuesday, January 25th, you will be able to get his awesome birthday presents!

Artix, Zhoom, Minimal, and Cysero have been working sooooo hard on the Bank and Inventory space issue. It is still being worked on and we are HOPING to have it out next week, just in time for the CAD event! We are all keeping our fingers and toes crossed that everything goes according to plan!

Uh-oh… did I just jinx us? Every time we say that… things go terribly horribly wrong, the servers asplode, and mushrooms get thrown at my face. But maybe… just maybe… everything will go perfectly fine and we can all get bunches of new inventory space omgomgyesyesyesYES!!!!