Yesterday, I became aware of an issue with Ballyhoo rewards -- where the AC rewards were removed and the gold prices dropped.* 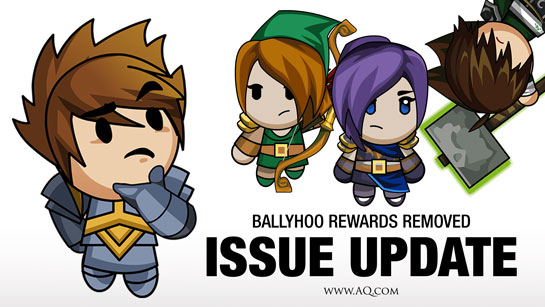 This was due to an issue with our ad network, where the available ads we had to show had dropped significantly, so the AC/gold rewards were trimmed.

Now that we're aware, I've asked Captain Rhubarb to return the gold rewards to what they used to be. That should happen this week. Once I get back from vacation, I'll look into other ads we can offer, so we can bring those free ACs back ASAP.

* Thanks for the heads up, ZippleClopper and Rastaban (for the forum report) and to everyone who submitted a Bug Report to the Tracker!