Welcome to the new year! AdventureQuest Worlds is officially, for real, over a decade old. That's 10 years of adventures, epic boss battles, crazy banana suit-wearing, pancake-flipping... and CHAOS! Thanks to you and your fellow heroes, we are still updating the game every week with new stories, challenge fights, and rewards... our game grows each and every week. 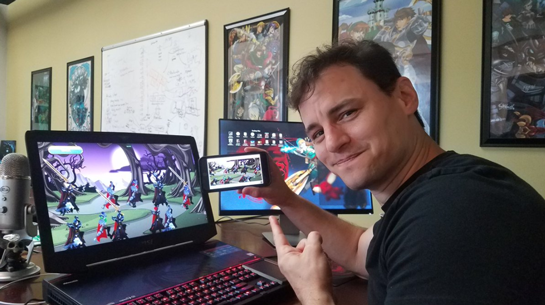 But growing is not the same as evolving, and that's what we're here to talk about today - our plans to grow and evolve AdventureQuest Worlds in 2019.

What are the plans for AQWorlds in 2019?

This is the easiest question, and the most exciting answer:

What are our plans for AQW Mobile?

AQWorlds Mobile is a misnomer -- the next version of AQWorlds will play on your PC, mobile devices, and maybe Steam or consoles!

Plans for the next evolution of AQW include:

The first, biggest push at the moment is to make sure we have solid character, load, login, and chat systems in place. Also in current development - the map system.

We have a team wishlist for AQW:Mobile, but just as importantly… we want to know what YOU want to see added in for AQW:Mobile. Next week, we'll hold an online, real-time Q&A in our official Artix Entertainment Discord server. Keep an eye on the Design Notes for a date and time.

so the team can keep a running tally.

Who will work on AQW Mobile?

Warlic (the AQW:Mobile project lead) got the ball rolling earlier last year. Then he was joined by AQWorlds’ lead coder, Yorumi, along with a few new programmers. They’ve been making steady progress, and at the end of this month, the group will be joined by Artix and Zhoom.

Zhoom (who is being borrowed from the AQ3D for a bit) will focus on making sure the game’s infrastructure and architecture can support everything (ALL THE THINGS!!!) we want AQW:Mobile to do.

Artix is coming on board to make sure the game plays as well as the current game does, and then will work with the team to make it even BETTER.

When will work begin on AQW Mobile?

Artix’s goal is to have something you guys can log into this year. It's going to be a challenge to meet that goal, but I believe we are up to it! Although we are automating the majority of the item ports, with tens of thousands of items, this will be an on-going process. We will start out porting the most popular and widely-used items (based on how many active accounts have them), and go from there. Like all our main games, AQW:Mobile’s development will be an active, ongoing project.

“But… didn’t Artix show a picture of AQW:Mobile like 2 years ago?” Well… kind of.  But not the way you’re thinking. The first try at making AQW: Mobile began in 2016, when we began working with an offsite company (so the current in-house team could stay focused on weekly updates).  That team of highly-talented coders put together a great prototype*… but one that ultimately wouldn’t scale up to what we needed, performance-wise.

What we want for the next version of AQWorlds -- what we need -- is something most mobile games don't really have to do.  The level of customization, the type and amount of gear we want to bring over... we're always so frakkin' SPECIAL! And that's what makes us awesome, but also really tricky to port.

* Pictured in the image at the top of this post.

Where and Why are we doing this?

This new version of AQWorlds will let you keep your current character and items, but will let us open the game up to many, many more players who currently play games on other devices.

This is hands-down our highest priority, because even more than the downloadable Artix Games Launcher (which lets us bypass concerns about Adobe FlashPlayer dying), bringing AQW to more platforms will let us keep its development going strong… and getting even bigger.

When the rest of the devs at the Secret Underground Lab began their week-long Game Jam, Memet (the lead writer for AQWorlds) began a 3-4 week long WRITING JAM. She, Artix, and I met late last year to review and finalize plans for the year-long Queen of Monsters’ Saga finale.

She is spending the next month outlining the next year of main saga updates. This is not the end of AQWorlds’ main story… it is just the beginning, and an entry into whole new (aq)worlds.

This story will take about a year to tell, and releases will begin after the early-year holiday events (like Carnival, Hero’s Heart Day, Lucky Day etc)

Spider-witches… Feral Troll Druids… Illusion-Controlling Infernals… ancient artifacts… and more? This is going to be an adventure to DIE for (but it is really, really important that you live!)!

Quality of Life Improvements on the Web

Over the last few months, Yorumi’s been able to add in a number of updates. So far, we’ve added in…

Originally, we did not think changes like this would be possible until the launch of the new server and client on the web. But working together, last year Warlic and Yorumi got a version of the live / current client working and able to be updated.

The inability to update the existing game client was one of the main reasons we began rewriting the server and client -- we had reached the limits of the game, and it had grown too big to publish.  Now that we ARE able to make changes and improvements again, we have re-focused our plans, and the new server and client will be exclusively for AQW:Mobile.

The new server Yorumi built for AQW (the web version) is the foundation that AQW: Mobile is built on. Without needing to accommodate a decade’s worth of functionality and features that had been built by many hands over many years, he was able to strip the server down to something clean, polished, and perfectly-poised to serve as the backbone of our NEW AQWorlds.

If you were one of the heroes who helped us test on the PTR servers, and have saved up your Quest Mission Sprocket, a quest to redeem them for your Sir Ver Bank pet will be added next week.

And as Yorumi has time, he’ll be free to investigate more changes to the web version of AQW.

Wait... HOW will all these things happen?!

There is a lot to do to make all of this happen, which is why we are segmenting the team intelligently. The team members responsible for the weekly releases and updates will continue working on those as AQW:Mobile programmers focus on its development.

We've learned a lot from the last decade of game development. That is what looking to the past should be for -- learning so that as you look to the future, you can do/build/be better, without making the same mistakes. It's always better to look to the future than dwell on the past, once you’ve learned from it.

With the new server, a team of highly-talented programmers, Artix for creativity and design direction, your feedback and requests from the last decade, and the game we have to serve as a road-map… our journey is really, finally underway.