They level up so fast, don’t they?

The game that started it all just turned 20 years old! 🥳

Back in the day, the original AdventureQuest (commonly referred to as BattleOn) dominated high school computer labs since it was legitimately one of the two online games available at the time. Sure, there were other Flash-based mini-games out there like Frog in a Blender and Gerbil in a Microwave,* but none of these time-killers compared to the full RPG experience of AQ. 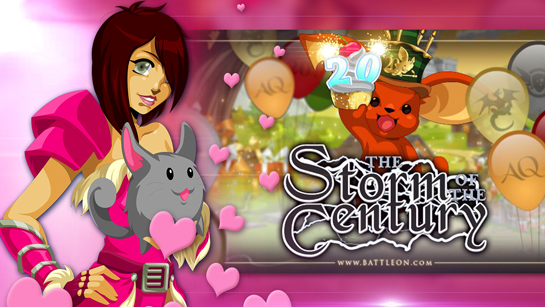 Before AQ came along, the only way to play a full RPG video game was to buy a physical game for your PC or console. That. Was. It. You (aka your parents) would have to shell out like $50 to buy a game cartridge or a CD, oooor you’d have to wait weeks for a certain game to become available at Blockbuster.** Of course, there was always the option to play games at your friend’s house, but it wasn’t much fun playing a single player RPG with only one save slot 😭

** I am seriously aging myself with all these archaic references.

But then!! AdventureQuest came along in 2002 and revolutionized the gaming experience! No longer did you have to worry that your eMachines computer wasn’t powerful enough to run the latest CD-ROM; AQ made gaming possible anywhere, so long as your computer was hooked up to the internet (back then, it was called the World Wide Web dial-up connection). High school and middle school computer labs were prime gaming grounds thanks to AQ’s browser-based gameplay, a F2P model that was unheard of at the time, and some of the worst graphics you had ever seen!

Fast forward 20 years, and AQ is still free-to-play with much better graphics than before (except that default character face — goodness gracious!!). If you wanna check out the game that started it all, check out that default face I mentioned, and check out the birthday celebrations happening now in the OG AQ, then tickle this link right here!

There are some things in life that are out of our control. Sometimes it’s pimples, sometimes it’s terrible fashion trends, and other times it’s devastating forces of nature. Hurricane Ian wrecked Florida last week; our thoughts, prayers, and positive vibes go out to everyone affected by the storm. Thankfully, all of the AE team and their families were unharmed, although some suffered property damage and went without power & water for many days. *gasp* Does that mean y’all went without coffee too?! *sobbing hugs*

Hard to work on anything — esp computer game stuff — when you don’t have any power. That being said, we have to push back AE’s Anniversary event to the following Friday, October 14, 2022. I knnnnoooww I said it would begin Oct 7, but good luck voicing complaints to a Hurricane 🤷‍♀️

The 20th Anniversary event is still so enormous (and somehow got even bigger, thanks Artix lol) it will span the course of 2 weeks PLUS we’ve got Mogloween nipping at our heels AND ermahgerd there’s so much going on this month and in this run-on sentence SO here’s the current updated AQW release plan (barring any other force majeure events):

As if all that wasn’t enough, there’s all kinds of other stuff you can do in the meantime, like gettin’ yer gauntlets on the new Star Swords and collecting viscera (uh wut?) during the newest Carnax adventure. I saw somewhere on Reddit that there’s this heccin sweet house item but idk if that is for realsies or is just joke. It was these 2 dragons coming down through the ceiling as if home insurance would be a-okay covering that claim.

Well just like everyone else at AE, I have got to get back to work! BTW: when I wrote this, it was Wednesday, so that means we should ALL have worn PINK! 💞