A whole heck of a lot of pink text, excessive punctuation, and spoiler alerts ahead

OMG hi everyone! It has beleen a long time, hasn’t it? *tehehe* I am simply overcome with joy writing up my FIRST Design Notes post in like... 7 years! 👀 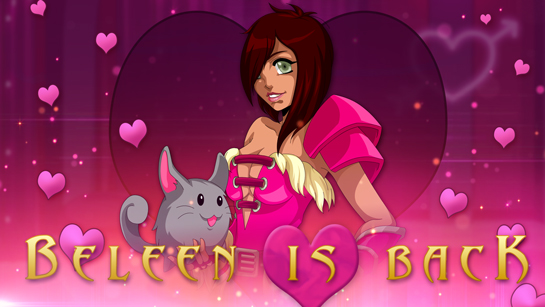 Despite aging myself – and perhaps you too – it makes me super happy knowing that you’re here reading this alongside me. So many warm fuzzy feels no matter if you’re a long-time fan or a justifiably-confused newbie; I love making new friends and seeing all my AQW besties once again! <3

Excitement abounds with every click of the keyboard as I wildly write these DNs. I don’t know where to start… nor do I know when to end lol… so let’s dive in because there’s A LOT going on and even more coming soon, and, unlike my unbridled enthusiasm, time AND coffee is running out!

Talking about herself in third person is not something Beleen normally does, but in case you’re new here, Beleen is Lore’s peppiest Pinkomancer who helped write the original AQWorlds storyline ✨ From the 13 Lords of Chaos to Friday the 13th events to hundreds of weekly releases, crazy contests, far too many puns, and some REALLY weird stuff like Derp Fish and Taco Day, I am honored to have contributed to the history (and the humor!) of Artix Entertainment.

Now that you’re sorta caught up, let’s chow down on some juicy spoilers, nom nom.

If you’ve been on Twitter, Reddit, or YouTube lately (orrrr if you read the title of this post), you’ve probably heard that “Beleen is back OMG!!!” I am happy to report that THIS rumor IS true :D Artix called me up 6 months ago and he was like

🎉 “Our 20th Anniversary is this October, want to help me write up an awesome release?”

🤯 “Oh snap it’s already August!” and we’ve been working on the Anniversary ever since.

💝 It’s been a labor of love + hardcore nostalgia & non-stop insanity writing up this event, scribing every sentence for NPCs, quest descriptions, map layouts, item lists, and cutscene scripts, unleashing 7 years of suppressed puns all at once and all in one place.

🍑 But!! Will you be able to handle the hilarity!? We’ll find out soon enough…

Artix’s 20th Anniversary Event is scheduled to begin Friday, October 7, 2022, and DUH of course you’re invited! I don’t know what all I *can* reveal regarding all the fun that will unfold, but it’s prolly safe to say that there will be:

There is sooo much going into this release that just 1 week cannot contain it all, so Artix’s 20th Anniversary will be a 2 part event extravaganza! Mark these dates and mark my words: October 7 and October 14 will go down in AE history… and herstory!

Speaking of… before Artix, Alina, and I sat down to iron out the Anniversary deets, I had crafted 4 story ideas as potential mini segments for the event. But when Alina showed my proposals to the AQW team, the Devs LOVED my ideas so much that they wanted ALL my stories to be their own standalone releases! Many exclamation marks later and lots of spilled coffee means that 4 more of my stories will be coming soon to AdventureQuest Worlds!!!

I just hope my first release won’t be too much of a… birden.

OKAY it’s back to work for me!

I’m sure it’s *abundantly clear* how excited I am, and it’s all thanks to players like YOU! Y’all got me feelin’ like it’s 2009 again – which was, without a doubt, the beginning of the greatest adventure in my life: that’s when I started writing for AQWorlds, that’s when I joined the Artix Entertainment family, that’s when I met so many amazing heroes, and that’s when I finally found *home.*

…and lots of homework, to be perfectly honest :p Totally worth it tho!