The Fall of Aeris Battlespire.

True to form we are beginning the Doomwood Zone as brutally as possible... with one on one Player versus Player combat in the Doomwood Arena.

Once King Alteon declared that no blood would be spilled between heroes either on the land or in the seas of his realm... but there are always loopholes. Soon arose the Aeris Battlespire. A massive floating citadel (which was neither on the land or sea) with battle arenas sprouting from its massive arms like ripe fruit.

It quickly became a proving ground for the worlds greatest fighters who would step into the arena for honor and glory and fight tooth and nail for the title of arena champion and all of the rich rewards that came with the title.

When Sepulchure finally stepped out of the darkness and cast his evil shadow across Lore, much of King Alteon's lands came under attack. Sepulchure might have even destroyed the good King if not for Drakath chosing that exact moment to unleash his chaotic influence on the world (what is more chaotic than introducing a new threat at the very moment when two evenly matched foes are facing each other?).

During that long and deadly war Aeris Battlespire chose to side with Good against Evil and they attempted to lay siege to Sepulchure's flying dracolich castle. The battle was short and brutal and Aeris Battlespire fell to the ground in flames.

Since the ruins fell into the cursed lands of Doomwood, not even the most evil of Lore's great heroes has dared set out in search of them. Noone ever heard from the once great arena again... until today.

Are you ready to pit your skills against the greatest fighters in all of AQWorlds?

There are two ways to fight a 1v1 PvP battle.

1) 1v1 Strangers: Use the button in Battleon to travel to the Doomwood Arena. Once there speak with Dumoose, the PvP Master. One of his buttons reads "1v1 Strangers". This will eventually out you in que for a 1v1 battle against a random foe who has also qued up. Our matchmaking system looks for the best possible match for your level and tosses you into a random Doomwood Battle Arena. The fight is over when one of you is defeated.

2) 1v1 Friends: Right now, the only way to battle a specific friend (or foe) is to use the /JOIN function. Just arrange to face your opponent in either doomarenaa-, doomarenab-, doomarenac- or doomarenad- then type in a room number higher than 1000. 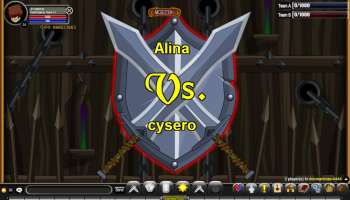 Speak to Dumoose to view all of the special PvP gear set up just for 1v1 players. You will need to earn 1v1 PvP Trophies to buy the gear (all designed by Dage). 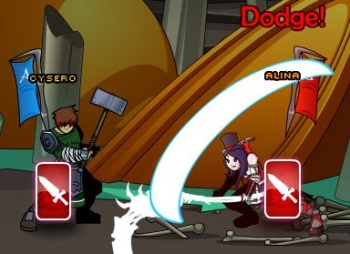 Dumoose has a daily quest. Accept his quest and gather TEN 1v1 victories. After TEN wins, return to Dumoose and turn in the quest for a PvP Trophy. Come back tomorrow for another trophy, etc. Save up trophies for the item that you want!

1) Keep Your Honor. If you're about to lose to someone and you log out (regequit), it doesn't cost them anything. They can get another win from someone else in 1-3 minutes. All it does is make you look like a fool who has no honor and can't take defeat with grace.

2) Keep Your Cool. Nobody LIKES to lose but some people know understand that someone HAS to lose in PvP and there is a 50/50 chance that it will be you. If you get defeated, don't get angry. Equip one of Reens' potions and get even. If someone is yelling nonsense at you, be the better person. Just click on their name and use the IGNORE function. If they are WAY out of line, report them THEN ignore them.

3) Keep Your Forum Login Handy: If you notice a bug (in PvP or anywhere else for that matter), REPORT IT ON THE BUGS THREAD! Please remember that posting bugs on Facebook or Twitter doesn't do anything. we NEEEEED Bug Reports on the forums to fix bugs. 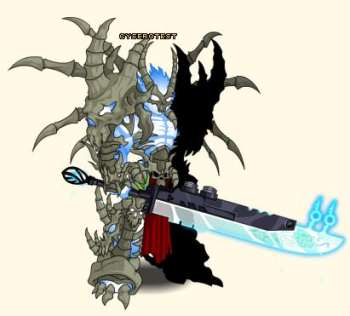 Here is the Demonic Nemesis set from player Ninjudo. 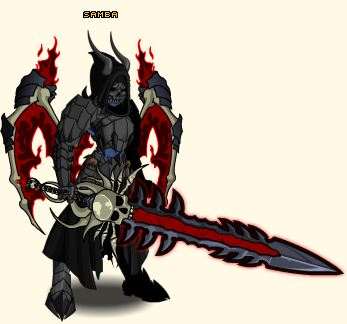 Or mayne you like the Death's hand set from _Aegis_ 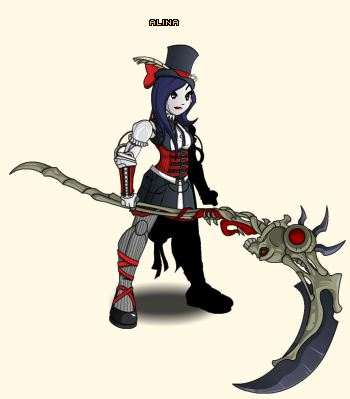 Or maybe the Gothika armor suggested by Laken is more your style! These are not the only items going in today either. Be sure to check them out! 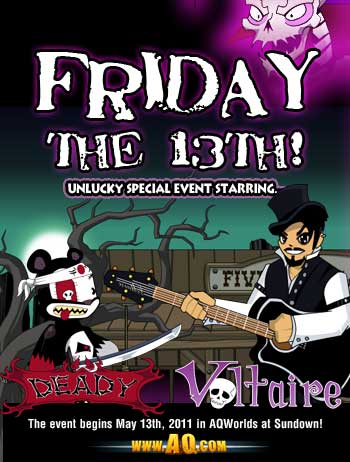 Remember that almost all of the items will be rare once the event closes. I say ALMOST because Voltaire has requested that we upgrade the Vorutanian Key Blade itself from a basic rare to an ARTIFACT. This means that it will someday return to the game at random times (probably when Voltaire visits again) but unlike a seasonal rare you will never know when it will return. It may be years before we see it again.

For those of you who have not checked it out you, you can actually BUY the Vorutanian Key Blade that Voltaire himself wears around his neck in real life! 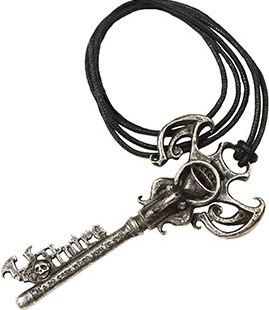 That is some COOL real-life swag. Check out the links at the bottom of the Friday the 13th Events Page to find out how to get one for yourself!

HeroSmash Founder Is Coming To A Close!

If you're not a Founder in HeroSmash yet, TIME IS RUNNING OUT!

SO many people ask us EVERY DAY how to become Founders in AQW. We tell them you need a time machine because ONCE YOU MISS IT, YOU MISS OUT FOREVER!

DO NOT be one of those sad souls. You still have until the end of this month to become a HeroSmash Founder but the end of the month will be here before you know it!

Also, all of you aspiring film-makers out there, don't forget that we are STILL looking for new Player based NPCs to add to HeroSmash.

Here's a tip: Eventually a lot of the really, really, REALLY GOOD movie makers on YouTube will find out that they can actually get themselves inside a video game which hundreds of thousands of people see every week and say to themselves, "Hey, I could get into this video game!".

You want to get in on this before that happens, because when that happens then our standards will go WAY up. You guys have already submitted a lot of great stuff but some of those folks on YouTube are crescent fresh.