Our 10th Anniversary begins this week

Welcome to your AQWorlds' 10th Anniversary party, Hero, and thank you for battleon alongside us! No matter if you've been with us since 2008, or just created your account yesterday, this party is for you because... without your enthusiasm, support, loyalty, and encouragement, we would not be here. 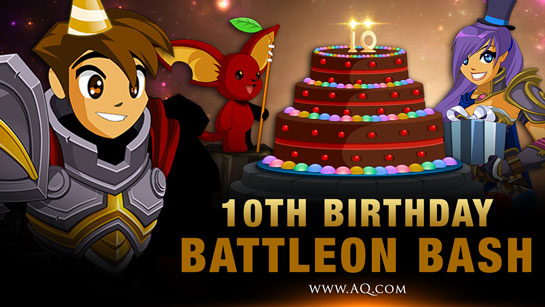 Log in NOW as we begin the first week of AdventureQuest Worlds' BIGGEST anniversary celebration ever. Head to Battleontown to /party with all your favorite NPCs and friends from across our game universe. With 4 maps, 21 quests, 11 shops, 5 cutscenes, and over 60 items, this week's DOUBLE 10th Anniversary Birthday/Sepulchure's Saga release is HUGE!

Plus, each of the Game Leads' NPCs has their BattleCon shop featuring imported gear from their games PLUS a new item just for you!

Our Gifts to You: Free ACs and More Space!

Yesterday, we gave all eligible heroes 500 free AdventureCoins and more inventory and bank space as our way of saying thanks! for playing AdventureQuest Worlds during our 10 year anniversary. 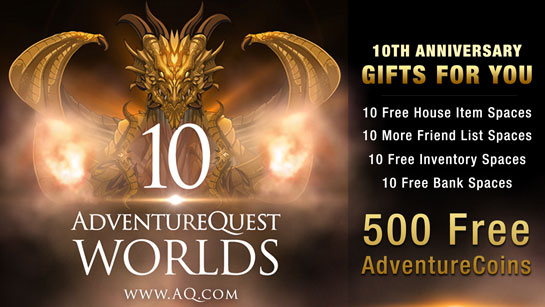 Join us this week for: 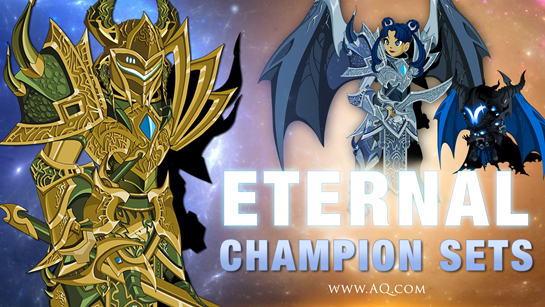 The Eternal Champion's Paragon and Nulgaht pets each have a quest for equippable versions of their wings, to help you and your companion sync up on and off the battlefield! 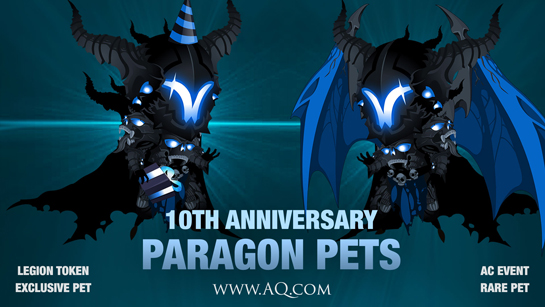 The Undead Legion and Nulgath Nation are two of the most popular factions in AQWorlds. That's why we've created pets to help YOU celebrate your time here. Starting tonight, find the exclusive

Each pet has a quest for an equippable version of its helm.

The 10th Anniversary Paragon and Nulgath pets will be available until the end of the year. If you're only just now joining these factions, you will have several months to farm for the requirements to unlock the pets! Happy battling!

Starting tonight, members can talk to Gravelyn in Battleon to try out the ShadowScythe General Class. This baby has some lore behind it (he was originally a LightGuard General who... sadly... fell to Sepulchure and Noxus) and a LOT of power. 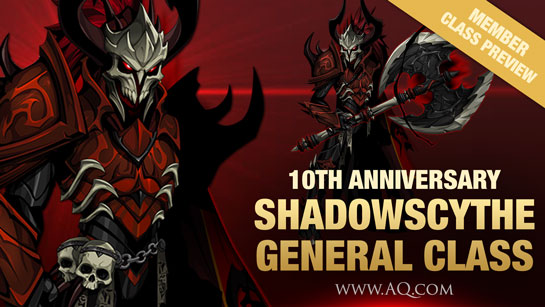 Starting tonight, members can talk to Gravelyn in Battleon to try out the ShadowScythe General Class. This baby has some lore behind it (he was originally a LightGuard General who... sadly... fell to Sepulchure and Noxus) and a LOT of power. 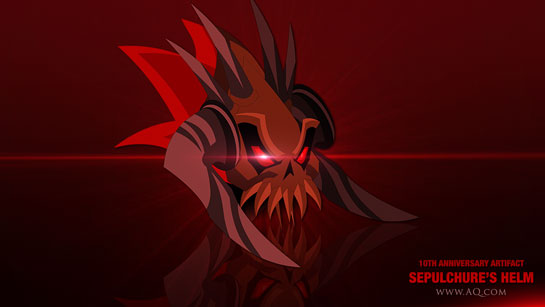 Note: the color custom helm will arrive next Friday.

Story Release: The Rise of ShadowFall

We continue Sepulchure's Saga with Chapter 2... the Rise of ShadowFall! This section of the story follows Sepulchure as he battles to build a foundation for himself. Noxus the Lich is very willing to use (and abuse) his desire to expand. This week, fight through /noxustower as Sepulchure on your way to become the darkest ruler Lore has ever seen! 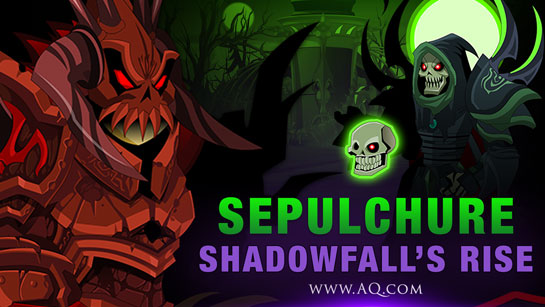 Our 10th anniversary event is really a double event. There's the full birthday release, but with such an milestone year, we wanted to tell a story that none of our games ever has. ShadowFall has been such a HUGE - but silent - part of your adventures through Lore that showing its creation felt like a worthy story to tell. Next week, we'll continue the tale as the Champion of Light (and Sepulchure's love) Lynaria re-enters the picture on HER quest to save him from the Darkness.

Tonight: the original AQWorlds Founders will unlock their exclusive 10th Anniversary Exclusive pet: Twilly's Platinum Dragon! This is our way of continuing to say "thank you!" to the original supporters of AdventureQuest Worlds. 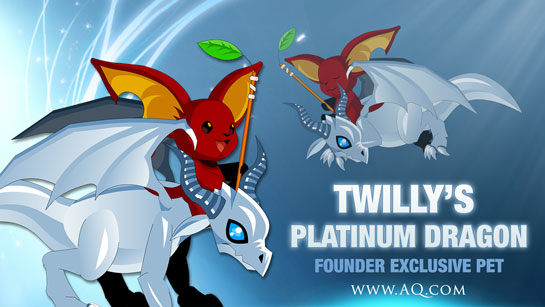 For the last several years, we themed the Platinum Dragon on one of the Talk Like a Pirate Day naval sets, and this year was going to be no different. We tried the "Ghostly Platinum Dragon" and the "Golden Platinum Dragon" AND the "Spiderkin Platinum Dragon" but... none of them felt QUITE right for such a milestone. So we went back to our roots, and your heroes. Twilly has been with you for the last ten years, and its fitting he join your platinum dragon now.

This week is only the FIRST part of our 10 year anniversary extravaganza! Next week: the ShadowScythe General Class will be available for all players. Buy it for ACs or farm for it (daily quest or boss drop methods). NostalgiaQuest will have a small update. The Color-Custom Sepulchure Helm and Renn/Zio armors will also be added.

And later this month, find...

You make our games possible, and for that Artix, the AE team, and I /salute you! Here’s to another 10 years and more battling to save this world and all the future ones we journey through together.